Museum of Military History, Vienna (From Wikipedia, the free encyclopedia)

The Museum of Military History – Military History Institute (German: Heeresgeschichtliches Museum – Militärhistorisches Institut) in Vienna is the leading museum of the Austrian Armed Forces. It documents the history of Austrian military affairs through a wide range of exhibits comprising, above all, weapons, armours, tanks, aeroplanes, uniforms, flags, paintings, medals and badges of honour, photographs, battleship models, and documents. Although the museum is owned by the Federal Government, it is not affiliated to the Federal museums but is organised as a subordinate agency reporting directly to the Ministry of Defence and Sports.[ The museum building (Arsenal object number 18) is the centrepiece of Vienna's Arsenal, a huge military complex previously consisting of a total of 72 buildings erected in the wake of the 1848/49 revolution. The Arsenal was the largest building project of the young Kaiser Franz Joseph I in his first years of reign, and served to consolidate his neoabsolutist position of power, as opposed to the revolutionary Vienna of 1848. It was Danish architect Theophil Hansen who designed what was then referred to as the weapons museum. The museum was completed on 8 May 1856, just six years after the beginning of construction (15 April 1850), making it the oldest museum building – planned and executed as such – in Austria. At the time of its construction, the Arsenal was located outside the outer ring of fortifications; in 1850, however, the area was incorporated into Vienna along with the original Favoriten (4th District; as of 1874, 10th District; since 1938, the Arsenal forms part of Vienna's 3rd District). Along the south-west side of the Arsenal ran the Vienna-Raab railway, for which the main Vienna station, the Wiener Bahnhof had been opened in 1848. if you want more to read - google & wikipedia is your friend.

NOW GO OUT AND RESCUE THE TAG!

This Tag found its way to vienna. Excactly near a old canon placed on the areal from the Heeresgeschichtlichen Museum. There is no entrance fee needed to go to the cannons. Should be available 24/7, but i recommend it during daytime. If you never visited the museum, i can recommend it todo it now!

Attention: you have to visit personally GC88X12 Pan-European Picnic Event to get the ninja!

The tag is wrapped in black gaffatape and hidden in a crack from the stone below the 8pfd. FELDKANONE Pedriano. (Infotable #76). See Picture fro a spoiler. 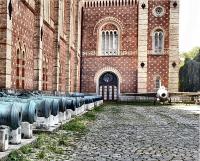